Last year I wrote a blog post about speed writing. I’ve never been a particularly fast writer (it took me eighteen months to draft my first novel, Bent), and it’s been an ongoing struggle for me to quit editing so much as I write. Without even realizing it, my right-hand middle finger darts up to the delete button, flipping me off (and cackling maniacally, I imagine) as it erases the offending word, phrase, or sentence I just wrote. It’s as if that finger has a mind of its own, as if it thinks it’s better than me. I try to keep the little bastard on a short leash, but as soon as I relax my guard, there it goes again, running off to undo all the hard work I just did.

What’s the big deal with editing as you write, you might ask? For some, I’m sure, it works just fine, but I’ve come to the conclusion that writing slowly – that nitpicking every last word – is akin to committing inspirational suicide. In the few seconds it takes me to correct a typo or rephrase something I just wrote, my train of thought careens off the tracks, coming to a shuddering halt. Sure, another train will come thundering by eventually, but who knows when that will be? Seconds, perhaps, or maybe a few long minutes as I sit staring at my monitor, the blinking cursor reminding me that whatever groove I was in has vanished…maybe for good.

Writing Bent, my quota was 350 words (about 1 typeset page) per day. I had good days when I’d pump out double or triple that amount, but I also had bad days when I was lucky to hit triple digits. In the end I finished the book, but sometimes I wonder how many great ideas I lost because I was simply too busy backspacing to allow my imagination free rein. Lots, I’m sure, which is a damn shame.

After many months trying to train myself to let go and just write, I finally acknowledged that perhaps I needed some help. Thus, while perusing a number of books on the topic, I stumbled upon Alan Watt’s The 90-Day Novel. An award-winning fiction writer and founder of LA Writers Lab, Watt has compiled a guide for writers who have stories to tell, but who get bogged down in the process of telling them. Through a series of daily stream-of-consciousness exercises, Watt teaches you to inquire into the world of your story, to explore your characters and their motivations while “holding it all loosely” so as not to choke the life from it. He advocates trusting your instincts, giving yourself permission to write poorly [while drafting], and remembering that there are absolutely no wrong answers here. This is your story.

I’m thrilled to report that in the thirteen days I’ve been following this program, I’ve written 40k words. (By way of comparison, it took me six months to hit that mark while writing Bent.) Are they pretty? No. Lyrical? Uh uh. Ready to hit the presses? Definitely not. But you know what? I don’t care! I’m writing! I’m allowing inspiration to flow freely from my fingertips, and most of the time I can barely keep up as the ideas pour out. And since I’m holding it all loosely instead of trying to force it, I’m discovering new possibilities I hadn’t previously considered. My characters have come to life in a really exciting way, and have essentially begun telling their own story. I don’t worry if I’m not sure what happens next; I trust that together, my characters and I will figure it out. 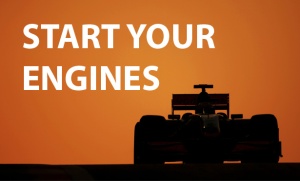 I’ve been writing seriously for three and a half years and for the most part, have loved every minute of it. The past two weeks, though, have been especially fun and I’m hopeful that, with Watt’s guidance, I’ve turned a new leaf. If I keep writing at this pace, I’ll finish drafting my second novel, Time Lapse, late this summer. My engine is revved and I’ve got my eyes on the finish line.